Synergy Academies was founded by two former Los Angeles Unified School District (LAUSD) teachers in 2004.  Dr. Meg Palisoc and Dr. Randy Palisoc both worked in inner city Los Angeles elementary schools where the majority of students were significantly below grade level.  Determined to prove that all students were capable of academic success, regardless of their background, Meg and Randy decided to open a charter school with the goal of eventually sharing out best practices with other schools.
Synergy Charter Academy opened with 6 founding teachers and 120 K-5th grade students in 2004.  The school was located on a church site, where every classroom had to be packed up entirely each Friday afternoon.  Despite this challenge, Synergy’s students flourished, and within four years, Synergy Charter Academy catapulted its students’ academic achievement to near the top 10% statewide.
In 2008, Dr. Barbara Shannon, also a former LAUSD teacher, joined the Synergy team to help start Synergy's middle school, and in 2011, Dr. Shannon co-founded Synergy's high school.

All Synergy schools are focused on STEM (Science, Technology, Engineering, and Math) and are intentionally collaborating with and co-located with traditional LAUSD schools on campuses in South Los Angeles. 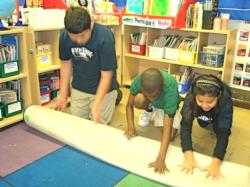